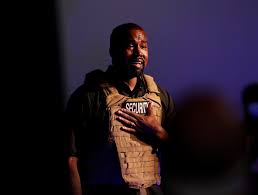 Kanye West had wept at the stage during an event at South. He recalled his late mother’s struggle. He said that he will try to make a law, which enhances people for “not to abort”.

American famous rapper, song-writer, Media personality Kanye west is now running the race of 2020 president. He has announced this on 4th July 2020 from his personal account on Social Media. American famous Actress, Model, Television personality, and businesswoman Kim Kardashian aka Kimberly Kardashian is the wife of Kanye West.

During Sunday night, in South Carolina, Kanye has taken up his first event for introducing people about his race. But after a moment some emotional talks placed and he started sobbing at the stage in front of an audience.

Kanye West said, “I was having the rappers lifestyle. I was sitting up in Paris, and I had my leather pants on….. and I had my laptop up and I got all of my creative ideas and the screen went black and white and God said, ‘ If you fuck with my vision, I’m going to fuck with yours’. And I called my wife and she said, we’re gonna have this baby. I said we’re gonna have this child….. So even if my wife were to divorce me after this speech, she brought north into the world when I didn’t want to. She stood up and she protected, that child”. West continued as “My mom saved my life. There could have been no Kanye West because my dad was too busy”.

He has announced this on 4th July 2020 from his personal account on Social Media. American famous Actress, Model, Television personality, and businesswoman Kim Kardashian aka Kimberly Kardashian is the wife of Kanye West.

After that, he was weeping into his hand and said, “I almost killed my Daughter! I almost killed my Daughter!! After that, he claimed that my “stance is not to make abortion illegal at all. It should always be legal. But there should be an option of maximum increase available ……. maximum increase would be, everybody that has a baby gets a million dollars”. Some people on social media are claiming that West is going through mental Abnormality and all.