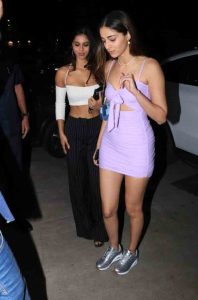 Earlier this week, Ananya, Shanaya and Suhana were together for several days. He along with his family attended Ritesh Sidhwani’s party to celebrate the wedding of Farhan Akhtar and Shibani Dandekar. The girls then planned to party together and a few days later again joined the night party Get Up.

Shah Rukh Khan’s beautiful daughter Suhana Khan was seen partying with her friends in Mumbai this weekend. The party was organized by Ahan Pandey, Suhana’s close friend and Chunky Pandey’s nephew, and also attended by Sanjay Kapoor and Chunky Pandey’s daughters Shanaya and Ananya. Some pictures of that time are going viral at the moment. Ananya, Suhana, Shanaya and Khushi all looked beautiful.

Suhana Khan, Ananya Panday and Shanaya Kapoor have been close friends since childhood. After reuniting at Ritesh Sidhwani’s star-studded bash earlier this week, the three girlfriends reunited on Saturday. The next generation girls of Bollywood stars looked alluring in their party looks. Posing for the shutterbugs, the trio grabbed the attention of many with their beautiful looks and impressive confidence. The young girl is becoming a fashionista. 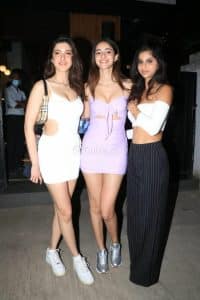 In Dio, Suhana is seen in a cold-shoulder white blouse and black pants, while Ananya is in a sky blue dress and Shanaya is in white. As they leave the restaurant, the photographer calls out their names and asks them to pose for the camera. Seeing his high pitch, Ananya also gestured and refused to shout. 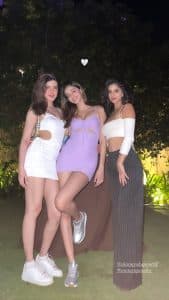 After giving them some pictures, they finally start walking towards their car. While Shanaya and Ananya make their way through the crowd of photographers, Suhana makes good use of the time to take selfies with fans.