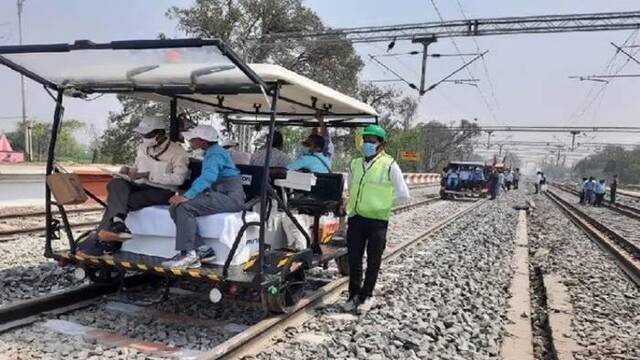 Patna: The new rail line between Patna and Ranchi between Barkakana-Siddhawar-Sanki will be operational from October. This work is in full swing now. The work will be completed in two months. After that CRS check will be done. Rail traffic on this new railway line will get the green signal by October.
The new route will reduce the distance between Patna and Ranchi by 40 km. This will have many benefits. Trains will be departed from technical stop at Gomo till late night. The new route between Sidhwar and Sanki is now in the final stages of laying tracks and hill tunnels within a radius of 25 km.

A provision of 55 crores has been made for the remaining works in this budget. Once the new route is commissioned, trains between Patna-Ranchi will leave Koderma directly via Koderma for Ranchi without going to Hazaribagh city and Barkakana via Gomo.
The train passing through the Andheri Tunnel will give an exciting journey to the passengers with high hills and beautiful scenic views. The new railway line will pass through three tunnels. Rail service between Hazaribagh and Koderma started last year. The work of railway line between Hazaribagh to Barkakana and Barkakana to Ranchi is now in the final stage. After leaving the tunnel, the train will cross the bridge between the two hills.
The trains from Patna to Ranchi are: 18625 Purnia-Hatia Express, 12365 Ranchi Janshatabdi, 18623 Islampur-Hatia Express, 18621 Patliputra Express. About 9-10 thousand people travel daily for Patna-Ranchi.
Tunnel Length – T1 600 m, Tunnel T2 Length 1080 sq m, Tunnel T3 600 m.
Presently, trains reach Ranchi by traveling from various stations of Muri in West Bengal to Bokara-Gomo, Koderma and beyond. With the commencement of the new route, the traffic congestion on Ranchi Muri Bokar, Gaya Koderma section will be reduced.
Apart from Bihar, the new railway line will also be used for freight trains from Jharkhand to Odisha and North India.