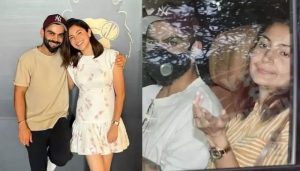 So Virat Kohli was seen roaming in the hospital, fans said that good news is coming soon