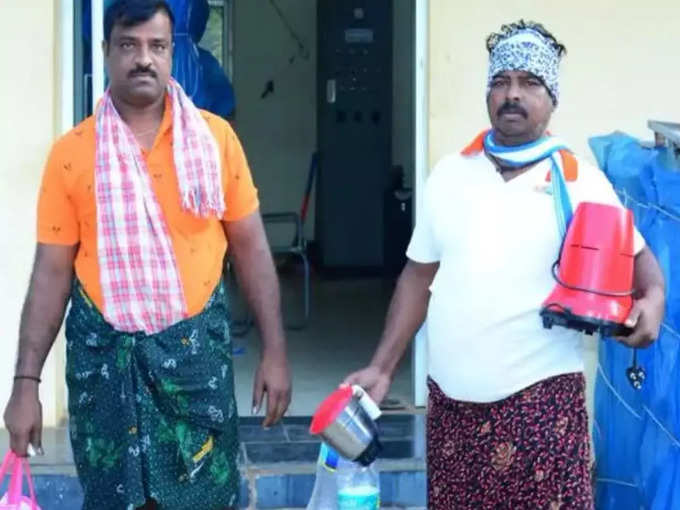 The power went out in the scorching sun. Worse than sitting in the sun for hours waiting for him to come. But when the light doesn’t come on, you have to do something. If someone has gone to the office of the electricity department to file a complaint, then someone has become viral on social media. But brother, a unique case has emerged from Karnataka. While the ‘Electrical Department’ was failing to light people’s homes, a man reached the department’s office with adulteration and spices. After this the person connected the mixer wire to the office socket and started grinding the spices.

goes to office and does electrical workHis name is M Hanumanthappa and he belongs to Mangote village in Shivamogga district. He carries mixers, jars and some mobile chargers to the office of Mescom (Mangalore Electricity Supply Company Limited) almost every day, otherwise someone throws it. He uses a mixer to grind spices in the office. Charges all mobiles. In other words, all the work related to electricity is done in the office only during the morning hours. And yes, there is no official objection. What is the full story behind it?

It all started 10 months ago when Hanumanthappa complained that there was no electricity in his house. His family gets electricity only for 3-4 hours a day. Even after months of running and sunshine, their problem is still not resolved. Tired of all this, Hanumanthappa called up a senior official of Mescom and explained how basic daily activities could not be done without electricity. The officer angrily told Hanumanthappa that he could do this at the Mescom office!

problem will be solved soon

So what… Hanumanthappa takes the officer’s case seriously and as per his advice reaches the office of Mescom every day. According to News18, a senior official of Mescom said that the IP sets could not be charged due to rain. However, he assured that the man would get proper electricity within a month.